After filling up the tank, grabbing some hot-pads for the sleeping bags and a few snacks we crept outside of the little town of Homestake. An off-road from the main led us along an icy one that wound into the hills for about a mile before coming to an opening. Not plowed or groomed but the snow was packed hard and drivable so we had no trouble getting in. The opening was probably was just under an acre but it was dark enough that we could barely see the forest lining.

With the car lights on we popped up our two-person tent, rolled out our sleeping pads and bags and set a tent light, played our meditation downloaded soundtrack and busted out the Uno cards on this frigid night. A bottle of good bourbon our friends Nick and Vanessa had gifted us prior to leaving San Diego opened as we sipped and battled each other in the middle of Montana. Stars were sharp in the sky while the wind howled outside, pressing against the rain-fly like claws to no avail. The spirits and our spirits kept what warmth we could muster alive. It was fifteen degrees fahrenheit with a heavy wind-chill and the rest of the early morning ahead of us. 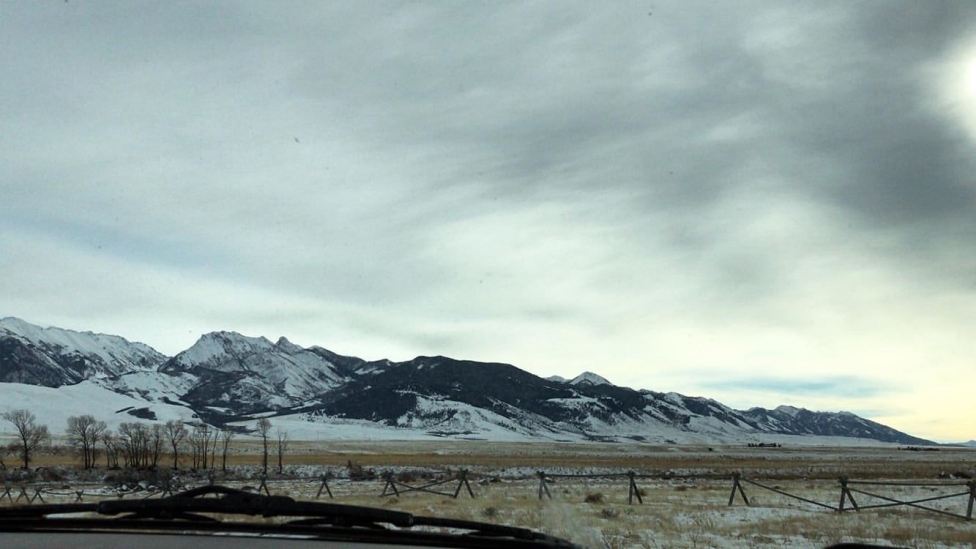 In the middle of the night I felt as if I was being thrown onto Bia as the power of the wind increased and lifted the whole side of the tent like it was an intruder in its domain. My legs were the first to get chilled in which I placed one of the head pads in the lower area of my sleeping bag as I rubbed my limbs together to regain heat. Bia and I woke up numerous times throughout the morning adjusting and readjusting to hold in the last bits of warmth. Bia in particular had a fear of the wild animals attacking us. By 6am we’d had enough of the cold and packed up camp, plus we were trying to accomplish two things this day; visit Yellowstone NP during daylight and make the trek to Denver, Colorado. To Yellowstone from where we were was just over two hours and from the park to Denver another eight hours.

A rough sleep only allowed an hour of driving before we pulled over to a rest area and had to nap for about an hour. Back on the road with the weather conditions starting to become blustery and snow covered we slowly made way into a tiny town of West Yellowstone and the entrance to the park.

Just before making the last turn through town towards the park I recalled passing a gas station and as we prefer to keep a full tank turned around. As we were filling up in the all stillness of this touristic town a voice from across the parking lot broke the silence. A gentleman noticing our plates as well as the store clerk and the only open business on the block inquired on our journey. As I told him Yellowstone he ushered me inside and gave me the update

So apparently the first couple months of December or when it snows they close the park and let the snow pack before grooming and shutting down all access to the general public besides snowmobiles and a tour that’s run on snow-tractors. This was during their closed period. With a map he gave me a couple best routes to get to Denver. The longer yet safer route running north before heading back south or through the Grand Tetons and Jackson Hole which there was a storm rolling through later that day and would be the more advanced course and being the more direct. With parting the gentleman didn’t have any windshield washer fluid for sale but did offer some of his personal stash as well as the best watering hole in town, Buffalo Bar before thank you’s and such. Bia and I swung into the establishment stuffing ourselves with salad and a 16 ounce buffalo rib-eye dinner before trudging on. 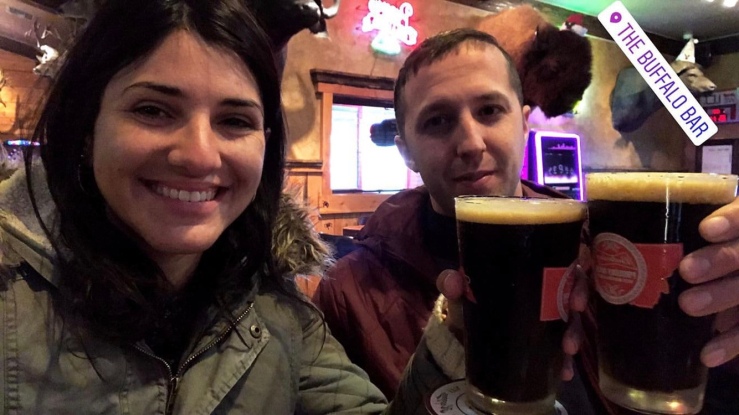 Wyoming was an interesting state. Never had either of us met a soul from Wyoming and even living in the states through my lifetime had never had anyone tell me to visit any of Wyoming besides Jackson Hole which skiers would rave about. Bia drove from West Yellowstone as I took a snoozer preparing for the long haul latter. Just before getting to Jackson, Wyoming came one of the steeper climbs of our trip amongst other traffic and icy roads. Bia, from Brasil had experienced snow a handful of times by now but had never driven in it. She was doing an outstanding job with my overbearing backseat driving as I came back to life. We climbed steady up a ten percent grade. To put into perspective, the steepest grade uphill or down we’d came across throughout any of the Rocky’s was six percent and that seemed to be the going rate. This was almost double as the slick road twisted and turned. Local traffic flew around us driving over the speed-limit and looking to cause accidents. I like to think of myself as an able driver even amongst aggression and was disturbed on the wild driving. As we made it to the peak of the mountain and a lookout point and figured on taking over behind the wheel and with an abrupt request to pull off to the side we hit ice and the car slid back and forth with cars on the steep incline just shy behind us. With luck on our side we straighten out and parked without any further issue.

Backcountry skiers and snowboarders skinned or marched up to the mountain around us. You could see for miles and miles as with the Tetons ahead of us and the town of Jackson below. Slowly taking the winding road to the ground had my hands dripping with sweat as wind and large trucks raced by us, ripping around the sharp corners at 50mph while we kept just below the speed limit. Jackson was the most wonderful little town filled with ski lodges, hotels and small grocery stores. It was about the last of much civilization we would see for the next six hours.

Wyoming itself was true back country. Thinking of Montana, Utah or Colorado as cowboy country changed my outlook after seeing a bit of Wyoming. We traveled on a straightaway, high in elevation, the speed limit 80mph and only large trucks ruled the road. Ranches galore populated the middle of the state with basic houses and fencing made for purpose. Nothing glorifying ranches as we’d noticed in Montana, large estates and fancy looking ranches. A new found respect for Wyoming and its beauty as we worked across the state. The last couple of hours once again brought the sweat and anxiousness we had entering the state as the traffic signs warned of 60+mph winds and closure to “high profile light vehicles” along the main rough into Colorado. Into it the roads had been snowy but fine (I know, a four-letter word) giving me confidence into making it through the mountain pass. The rest of Wyoming felt like a continuous downward drive at a six percent grade decline and winds shuttering the car as if it was to spin out at any time. The only other vehicles that appeared to be making it through the pass were semi-truck driving with a purpose. I remember having no service, the offline maps showing a change of highway 45-miles ahead which I couldn’t wait to reach. Bia fast asleep besides me but for the best as I could give my undivided attention to the road without her anxiety adding to mine. Well, reaching the 45-mile mark was just the road combining with another and another 45-minutes was added to the treacherous nightmare.

The relief of making it to flat and less winded ground was well received while just about to the state line. Almost as if being hazed entering Colorado, we came back into a declining grade for the next thirty minutes. This time without the high-velocity winds but still not getting a break.

Pulling into Denver couldn’t have been the most joyous moment. A good friend, from school, Taylor had been at his work’s Christmas party and was now at home excited on our arrival. We made way towards Capitol Hill while more than ready to call it quits for the night…